UPDATE: As of 2013, Guillaume at Bennelong has unfortunately closed and ceased operations.

On my 8 day whirlwind tour of Australia, I was fortunate enough to dine at one of the best restaurants in town. It was indeed the best meal we had in our 8 days in Australia.

We originally wanted to catch Turandot at the Sydney Opera House but it would have been too rushed as our flight got in late in the afternoon so instead we got ourselves a reservation at Guillaume at Bennelong, the award winning fine dining restaurant in the Opera House.

The food in Australia was in general all very good but pretty expensive. Guillaume was not cheap but it wasnt as expensive as what has been voted the best in Australia: Quay, which was right across the harbour from Guillaume. We did not think it was worth paying over 220 AUD for an 8 course tasting menu that looked like something we could get in New York City for much cheaper. Whereas the degustation menu at Guillaume with 8 courses was much more worth the $195AUD. Voted number 8 in Australia, and awarded 2 chefs hats, Guillaume at Bennelong certainly lived up to its accolades.

You walk by a wall decorated with the various accolades it has received and then up some stairs before entering a dimly lit space under the amazing arches of the Opera House’s architecture. In the center are tall didgeridoos with aboriginal artwork painted on it. Up a level was the bar area with some dining tables then a few steps down again was the main dining area. 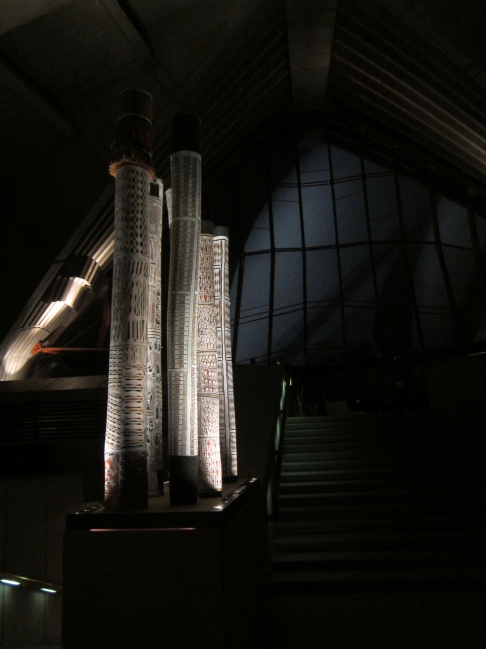 We were seated in a corner table. The service was professional and efficient and also very friendly. We decided it was more worth paying 195AUD for an 8 course degustation menu than 95AUD for 2 courses and did not opt for the $275 option for 90ml wine pairings for each dish, instead we ordered a half bottle to share.

The degustation menu was as follows:

Royale of Asparagus: with mud crab and truffle

Scallops: with a lemon emulsion, watercress veloute, and Sterling caviar

Sealed John Dory: served on a bed of carrot and ginger puree, coriander and pomme allumette

Our Amuse Bouche: local oyster in a yuzu jelly, and a tuna crunch dish. Both were very good. The Oyster was very fresh and the yuzu jelly was a good agent to cover the sandy and sea taste of the oyster. The warm and crunchy sourdough bread and butter was also very good.

Then our waiter who very passionately recommended the 2008 Mount Marry Chardonnay arrived with the half bottle. He said it was his favorite wine and it was a very popular wine among diners. I could understand why he loved it with such a passion because it was really really good! It had a slight fruity sweet tang which really came out when it was chilled and it was very smooth and tasty! Im no sommelier or wine enthusiast but I must say it was one of the best white wines I have tasted.

The yellowfin tuna: very very delicious and a well done/ presented dish. The tuna was very fresh and sweet and the sauce was great and it was a great idea to wrap it in the basil.

The asparagus: once again a very well done dish that tasted great and like the tuna was not overly salty. The royale of asparagus was creamy and sweet and the truffle added an extra kick.

Then came the scallops which were very delicious and indeed fresh. the lemon emulsion was fluffy and flavorful. And once again it was not too salty nor did any other flavors overpower any of the other ingredients.

Next was the sealed john dory. It was great, the fish was fresh and cooked just right and the carrot and ginger puree was probably the best part. Eating the fish with the puree and the coriander and pomme allumette was just great and it was like a firework of flavors and textures. 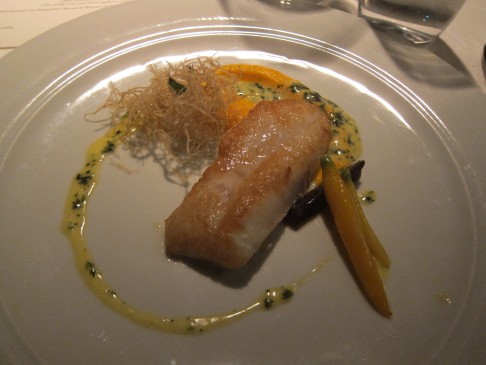 the roasted Barrasa Valley Chicken was good, the chicken was juicy and tender and the corn puree and side of asparagus, yubby and truffle added nice flavors but it did was not as mind-blowingly good as the appetizers.

The wagyu beef: was tender, juicy, and like wagyu beef melted in the mouth. It was accompanied by some freshly made and very smooth and creamy mashed potatoes which was very good and filled with the aromas of butter. While the beef was good, it was once again not on par with the appetizers.

The raspberry: was incredible. It was the perfect portion size and the raspberries were very fresh and very very sweet. The pistachio gateaux, vanilla cream, and raspberry sorbet complimented the fresh raspberries very well and was a very refreshing transition from the mains to the chocolate souffle. I’d take this dish over any simply cup of sorbet any day!

The chocolate souffle: very moist, but not overly moist, and very much “puffed” up. It was rich in the chocolate and the waiter simply pushed the spoonful of cherry ripple ice cream into the center of the souffle and this made the well made souffle all that much better. 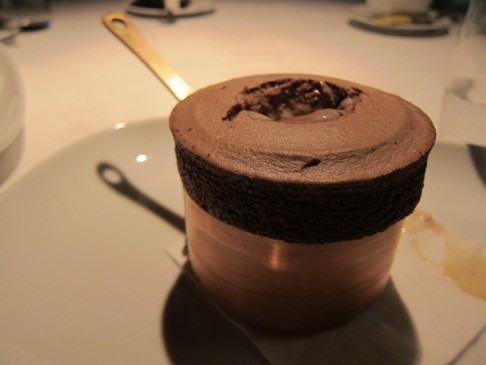 It was a wonderful meal paired with a very tasty wine. It definitely exceeded my expectations and lived up to the reputation it has gotten. Even though its no #1, I think it could be worthy of that position, granted I cant really say for I have not eaten at Quay, but it was just delicious.

Final thoughts: I would highly recommend anyone who visits or lives in Sydney to try Guillaum at Bennelong. Whether it be for a romantic night, a celebration, or for dinner before a show (they have pre-theater menus) or even for a glass of the Mount Marry Chardonnay. The food, especially the appetizers, is absolutely delicious and mouth watering, the wine is great and it has a great ambiance set in one of the greatest architectural masterpieces of the 20th century. In fact if you dont get to catch a performance then I would really encourage you to eat here because your meal will be around the same price as your show if not cheaper in some cases. And hopefully it will be as memorable a meal for you as it was for me.

Here is the website where you can look at the menus, make reservations and learn more about the restaurant: http://www.guillaumeatbennelong.com.au/home.html

Check it out, you wont regret it!