In early June I ventured down to South America once again. This time I was chasing waterfalls (yes a few ladies in the 90s will tell you otherwise, but in this case its worth it). I headed for Iguazu Falls (Foz do Iguacu/ Cataratas del Iguazu). It is the largest waterfall system in the world and straddles the border between Brazil and Argentina. It is one of the modern 7 wonders of the world. And boy is it a sight to behold. It is also featured in many films including “The Mission” as well as “Black Panther.”

While I will offer my usual itinerary, I will start the post with some tips on how to do the falls as I realized not much information exists on the internet (surprisingly). The end of the tips section is where I answer which side you should visit as well as tips for each side (the real answer is both if your schedule will allow).

Thing to keep in mind

It is not terribly hard to reach either. You can access it on either the Argentina side (airport code: IGR) or Brazil side (airport code: IGU), both sides have airports that have domestic flights for their respective country and LAN operates flights from Lima to the Brazil side as well. GOL, Azul, LATAM and Avianca Brazil all offer flights on the Brazil side. Aerolineas Argentinas, LAN, and Andes Air offer flights on the Argentina side.

If flights are too expensive, there are buses that run from major cities in both countries to the falls. From what I read in my research, you should opt to take the overnight bus to maximize your time.

The easiest but more expensive way to get around the area is by Taxi. The 5 minute taxi ride from the Brazil Airport to the entrance of the Brazil falls was R$17 (USD$4), I had my hotel arrange for a private taxi from the hotel (inside the Brazil falls) to the Argentina entrance, a total journey of about 40-50 minutes including immigration and that was R$185 (USD$47). Finally, the taxi drivers waiting outside the visitor’s centers on either side will likely not go by the meter and will definitely overcharge you, the 15 minute ride from Argentina side to the Argentina Airport was around AR$600 (USD$21).

The cheapest way is to go by local bus. While I did not experience this myself, my friends did this and said it was not terrible but just confusing at time if you dont speak a word of Spanish or Portuguese. From either side’s airport you need to take one bus to the downtown bus station and transfer to another bus that takes you across the border, the bus will wait for all passengers to complete their customs and immigration formalities at either end. But given that this is a major tourist spot for both countries, I am sure you wont get terribly lost and you will definitely find fellow travelers as well.

Another way I would recommend, especially if you are with a group of people, is to rent a car. The roads are well paved enough and the drive to and from the falls and between the two countries is fairly straight forward.

Both cities Foz do Iguacu (Brazil) and Puerto Iguazu (Argentina) and even Ciudad de Este (Paraguay) offer plenty of accommodation options. AirBnBs, hostels, bed and breakfasts, hotels of all budget ranges. I would say if you wanted to stay in a downtown area where majority of affordable options are, I would stay on the Argentina side as it is a bit closer to either side’s entrances (there are a few options on Brazil side close to the visitor’s center but they are not downtown).

If you are willing to stretch your budget, then the place I highly recommend staying at The Belmond das Cataratas hotel right in the middle of the Brazilian falls. Not only is it the only hotel within the Brazil national park grounds, guests have unlimited access to the Brazil falls before and after park hours. This mean basically private uninterrupted experiences along the path of the Brazil side. Furthermore the hotel is incredible. It has amazing food, service, and rooms. Not to mention select rooms and restaurants with views of the falls.

Like I mentioned, if your time allows, definitely do both.

Brazil:  The Brazil falls offers the panoramic views and has the shorter path. It also faces the sunset so on a clear day it would offer spectacular sunset views. But at sunrise it also has incredible views and glows bright orange/ yellow. The Brazil side also offers views of the massive Devil’s Throat from below. Takes the least amount of time, you can do it within one hour or spend up to 4 hours (depending on if you choose to do a boat ride or go off on some side hikes).

Note: public transport and private cars (unless staying at Belmond) can only access up to the visitor’s center. From there you board a bus that transports you along multiple stops including the start and finish of the main Brazil Falls path. You will get very wet in multiple areas, so either bring your own gear or use the rain coats provided in the park.

Argentina: The Argentina side is massive. It can easily take upwards of 6 hours to do this side justice. There are multiple paths that traverse the falls from above and below and take you deep into the rainforest. While the Argentina side does not offer you as great of panoramic views compared to Brazil, you get to get much closer to the various falls. The highlight on the Argentina side is the viewing deck perched atop Devil’s Throat.

Note: on the Argentina side it is mostly done by foot, and some areas are slippery. You dont get as wet on this side. Further there is a forest train system within the park; one route takes you from the entrance to Estacion Cataratas. The other route takes you from Estacion Cataratas and the Estacion Garganta (Devil’s Throat pathway start and end point). I recommend you walk to Estacion Cataratas and not waste your time by getting off one train then waiting for the next, as you have to get a numbered ticket and board your numbered train. If you have time and want to take in the surroundings you can also choose to walk the whole distance. I would prioritize Devil’s Throat first, and then depending on your time and interest prioritize the other pathways within the park (yellow goes through rainforest and takes you to the foot of a few falls; Blue takes you above the falls and marshlands). If you are lucky and water levels permit take the boat to San Martin Island and do the short red path there (I was not so lucky). The paths have signs that say one-way, but I was in a hurry and could only do portions of them and when I walked out back along the way I came, no one stopped me. 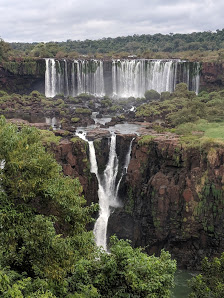 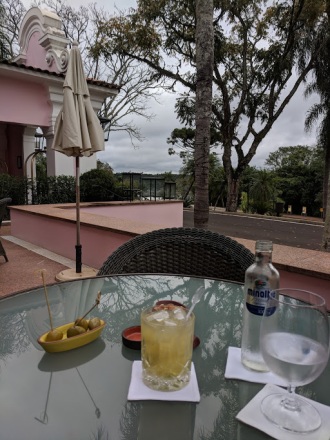 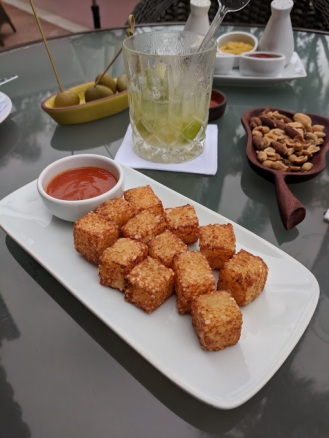 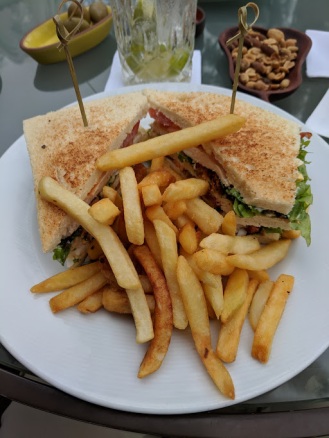 So, there you have my tips and recs for doing Iguazu Falls and my itinerary for a weekend trip. This is truly a worthwhile journey. The falls are just magical, stunning, mystical and surreal. It is a site that you have to see to believe.