Part II of my KLM business class multi city journey and continuation from my prior post on my flight from LHRAMSTPE.

As I briefly mentioned in my Part I of this KLM journey, all flights met expectations and were very solid. However, the ICNAMS flight was the highlight in terms of service and KLM Crew. Had the best purser and flight attendant. Engaging, warm, inviting, genuine, smiling the entire time, and all around had classy vibes, sort of like this bygone vibe of flying. The entire crew too just felt cohesive and bonded and was very much together. Even ones working in economy, when passing through business would both voluntarily and not attend to business passengers on their way to and from! The purser was very engaging and chatted and got to know each passenger as she came through prior to arrival with the Delft Houses. The service may not be the address by name, “anticipate your needs” above and beyond type, but it is one of the friendliest, most professional and genuine yet personal type of service I have experienced in the air.

Unfortunately for me, I was connecting from the satellite terminal in Seoul Incheon. This was an easy connection by ways of clearing security and boarding the train to Terminal 2, the relatively new home of Korean Air and Skyteam. However, Seoul Incheon Airport practically shuts down at 10PM, all the amazing features that have made Terminal 2 so critically acclaimed were closed, shops closed except for a handful of Duty Free stores that were manned but had most of their gates drawn and the convenience store. Even the transfer desk closed and for those who transfer on to KLM from non-Skyteam carriers or on separate tickets, you check-in at the gate about 1.5 hours prior to departure. KLM is one of the last departures at 12:50AM. They also use Korean Air’s lounge, which after 10PM, only one is left in operation for business class passengers, the main Prestige Lounge. Korean Air’s lounge is one of the worst full-service home-base airline lounges I have been to, which is unfortunate given the opportunity to introduce a innovative and fun lounge at their brand new hub. It is bare bones, feels like a hospital, minimal food and beverage selection and I am not even sure if there were showers. Nothing “Prestige” about it. The nice thing is at this house it was relatively empty. Otherwise Terminal 2 is a beautiful terminal, spotlessly clean and I’m sure is a fun place to transit when things are operational. Thankfully both the lounge and security check points allowed me through by seeing my e-ticket.

I headed to the gate at around 11PM to check-in with the agent. After some more wandering and duty free shopping for snacks, it was close to boarding time.

Unlike my prior flight, this flight was completely full in business. KLM’s 787-9s have the airline’s newest business class seat, reverse herringbone seats. These ones dont have a legrest that comes up and down but rather has a massive ottoman. There is a cubby with mirror and storage space for headphones and amenity kit, followed by a smaller storage area below the tray table for magazines, this is also inconveniently where the power outlets are located. I actually liked the massive ottoman and was not bothered by the lack of proper leg rest, while the seat itself doesnt come with as many customized functions or positions, it found it to be comfortable and offered just enough positions for relaxing, and eating. I think one of the cooler features is the adjustable monitors that can be tilted up or down for optimal viewing angles for people of all heights and for when you are reclined, not often you see this feature with Business class TVs.

Shortly after being seated, the flight attendant came by with slippers and amenity kits, having collected the male one on my prior flight I asked if I could grab the female one (same contents just different design of the kit). After that came the welcome drinks and I went for Champagne followed by wine list (same as prior flight) and menu distributions (posted at the end). One of the only minor things I noticed was that they didnt seem to collect the plastic wrappings from the slippers/blankets and headphones once you opened them. At first I was confused that no one came by to take food orders before or after takeoff but then I would learn that it was because this flight was a one-tray express dinner service. My guess is the late departure out of Seoul and very early arrival into Amsterdam to allow for maximum sleep. There was also no post-departure beverage and nut/ Dutch cheese service, not sure if this is only exit Amsterdam or just again due to timing of the flight. Shortly after takeoff, towels were distributed.

Then the cart came by, and I ordered the Korean meal, some delicious Bibimbap and once again went with the Bordeaux white. When the flight attendant was on her way back to the galley she topped off my drinks. After the meal was cleared away I was asked if I wanted any coffee/tea/ dessert wine…etc., I went for the Flying Dutchman Cocktail because its so good. She came back very soon with it, and after servicing other passengers came back and checked to see if I was enjoying the cocktail. I then finished my movie and reclined into bed mood and went to bed, this was before the purser came through with the chocolate houses.

I woke up a few hours before arrival and few minutes before breakfast service. Shortly after, the hot towels came through followed by the cart. I went with the Nutella raspberry filled crepes, it was delicious. Since my throat was getting a tad itchy I also ordered Orange Juice and hot tea. Once again my drink was topped off on her way through again. And the multiple flight attendants who then came by business to assist consistently topped off my hot tea when they asked if I needed anything else or if I wanted more to drink. My flight attendant always made sure each passenger had what they wanted, by asking if they wanted anything else to drink than the one thing they ordered, or offering more than one bread….etc., once it was settled then she would move on to the next passenger, efficient but not rushed at all.

Then the purser came through with the house cart. We chatted a bit, she offered to sign me up for Flying Blue seeing as I was not a member (I actually was but didnt use it on this flight) as she tried to see which houses I had collected. I went for #95 the Heineken Brewery. I then shamelessly asked if any passenger had declined to take one, the purser said unfortunately not yet but that if there was one later she would come back and give me another house. After she had made her rounds in the cabin and went back to the galley I thought for sure everyone had taken one. But then she walked out of the galley with a sealed bag and lightly shoved it in my lap, this wasnt in a rude sense just I dont know how else to describe the movement, but it was a “sshhh” discrete “here you go” gesture. Later when she came back to do pre-arrival checks and thank yous, I thanked her, and she just gave me a friendly grandma-esque wink. I did eventually swap out the second house at the Crown Lounge for house #87, a historic East India Company house.

At around 4:15AM we touched down ahead of schedule in Schiphol.

I cleared transit security and made my way to the Crown Lounge which was still closed. The Dutch are very much by the book, if the lounge opens at 4:45AM, it will open at 4:45AM and you will just have to patiently wait outside with the other early arrivals. They did eventually open like 1 minute early having seen a wheelchair assist passenger waiting. The first thing I did was book a shower at the Mercure Hotel that dont open until 6AM. The food was just getting set up, the breakfast buffet choices are very basic and I was still full from my flight and feeling sick so I just stuck to tea and water. The upstairs bar area is not open until 8AM.

After getting hydrated and freshened up in my two hours or so at the lounge, I made my way to my gate to board my LHR flight. This time the Euro business class on the 737-800 was more full but luckily I was alone on my side of row 1. Breakfast on this flight consisted of cheese, cured meats, jam and crackers and a choice of bread with berry yogurt and fruit bowl. I also had some coffee and fresh squeezed apple juice. Once again it was a quick 50 minute flight but the service was still friendly but efficient.

Once again we arrived ahead of schedule without having to circle above LHR. I then made my way to Terminal 3 by ways of airside inter-terminal shuttle transfer for my onwards connection to Atlanta.

A perfect roundtrip business class experience with KLM Royal Dutch Airlines in my opinion. Their proud history and heritage is seen everywhere as I mentioned previously. But it is also their friendly, professional, engaging yet efficient Dutch service that I think makes KLM a great and solid airline. Also cannot wait for when the Crown Lounge is fully complete, but just note its not always a great thing when you arrive ahead of schedule! 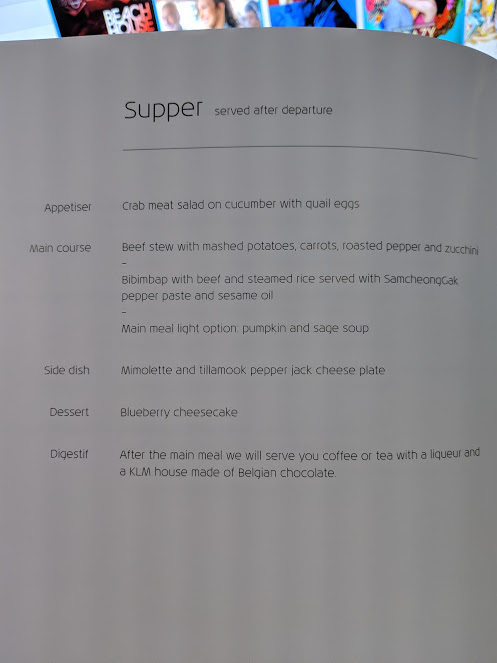 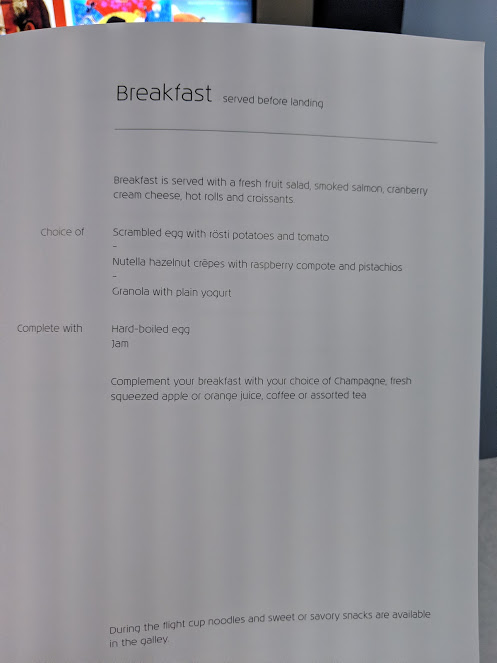