In May I had the chance to visit Oman, a country on the Southeast corner of the Arabian Peninsula. Oman is enchantingly mysterious, rooted in its heritage and traditions, proud of its culture yet inviting to everyone. I really enjoyed Oman and together with Jordan, it is one of my favorite countries in the Middle East. Oman and Jordan is where you can truly see the wonders of the region, experience the culture, history and traditions as well as meet some of the nicest people on Earth (contrary to Western portrayals). Furthermore, they are more authentic than Qatar or the UAE where, despite the awe and glamor, everything can at times feel artificial (because most of the time it is!). Oman is a nation that has something for everyone. Amazing food, culture and history (whether it been camping with Beduins or seeing an opera at the Muscat Opera House), outdoor adventures (scuba diving, sailing, fishing, sand duning, hiking, you name it).

Oman is also one of, if not the most, peaceful nation in the region. There are no conflicts within its borders and it is really not that involved in the conflicts outside its borders. Oman is friends or friendly with its neighbors and large Western allies that continue to exude their power and control in the region. All this makes for a very safe, welcoming and friendly country to visit. When I asked my day trip guide why this is, he attributed it to a few factors. First Oman has its roots in trade, its strategic location made it a prosperous sea trade empire that spanned all the way to Zanzibar, Tanzania (which today still see plenty of Omani influences). While less of a major trade hub today, it still thrives on those seafaring roots. Another modern influence, is the current Sultan. Sultan Qaboos bin Said al Said took over his father’s rule in the 1970s in a friendly coups after a lesser-known Omani Civil War. The Sultan is credited with bringing Oman into the modern age whilst maintaining its traditions, culture and roots as well as maintaining cordial relations with all its neighbors and foreign relations. My guide also noted that in many ways its also the Omani spirit. Omanis are very welcoming, friendly and for a majority Islamic country, open-minded people (but yes, its still a male dominated society). According to my guide, education up to high school is state funded, there is universal healthcare, women can drive, own property and business, buildings cannot be taller than 10-12 stories and various industries (small oil and natural gas producer, small manufacturing sector, large copper trade).

Oman is majority Islam, and most are Ibadi Islam, which is different than Sunni or Shiite, the two more commonly known sects in the West. I was there during Ramadan which presented some logistical challenges but over all it was still a great trip and the biggest bonus was that few people, including tourists, were out and about during the day and taxis during daylight hours were cheaper than usual as drivers needed patrons and would take you anywhere for basically any amount. The biggest downside of course was that no restaurant (local ones) or shops were open during the day. Museums, on the other hand, were mostly open during normal hours with some sites having special Ramadan hours. Furthermore, it is a dry country but alcohol is allowed to be served to foreigners. That being said, they are inviting and understand you do not adhere to the same values, so it is ok to drink water/ juice or have snacks or meals. I just would not do it in public during daylight hours. In terms of dressing, covering knees and shoulders is a must for both genders, but shorts are allowed, and for women it is advisable to bring a scarf or shawl of sorts to cover up when visiting a mosque or more local area.

Many citizens, including U.S., need a visa to enter Oman. Nowadays you can get one online via the Oman Police’s website. Its easy and you can choose for a one time or multi-entry visa (90 day window). My 90-day multi-entry tourist visa was 20OMR ($USD50). This is the recommended way as upon arrival you take your printed visa document and head straight for immigration, nonetheless they still have visa on arrival booths.

Oman’s main gateway is Muscat International Airport which just opened its brand new terminal in March of this year. Oman Air is a great airline, and they fly to many European and Asian cities. Otherwise you can fly Turkish, Emirates, Qatar Airways, Etihad via their regional hubs or take Swiss or KLM. Oman has a few domestic airports as well, which if you have time I should think you’d want to go explore the other regions of this vast and geographically diverse nation.

Oman has a rather strong currency, 1OMR: USD2.60, which means Oman is a tad bit of an expensive country to visit. Major credit cards are accepted at most places however at food stalls/ stands and some local restaurants, it is cash only. For 1.5 days I got around 75OMR (USD$200) in cash, and it was more than enough (paid with card at most museums and restaurants).

Getting around the country is a bit more challenging and can be expensive. Muscat has taxis, the ones from the airport are metered. My 20 minute, no traffic, ride from the airport to my AirBnB was 17 OMR (USD$44). Elsewhere, taxis can be hailed fairly easily and they also gather at major areas, most of these cabs require negotiated rates. I am not sure how much it would be normally but I had a whole range when I was there due to Ramadan. I got into one cab that told me they take me for any amount for a short 4KM ride, I ended up overpaying 5OMR (USD$12), because later another taxi took me back to the airport from my AirBnB for the same amount! There are about 2-3 bus lines in Muscat, you pay upon boarding and I believe its around 100-200 Baisa (USD$0.5). The buses hit major attractions but run about every 20-25 minutes. I did not ride a bus during my time. The best way to get around is to rent a car. The roads are well paved and easy to drive, and the rush-hour traffic isnt too bad.

There are many hotels in Muscat. There are a few that are world-famous including the Al-Bustan Palace Hotel, a Ritz Carlton hotel. And there are many more sprawling up. However, there are few hotels in the historic areas of Muscat as most are either on a beachfront of in the central business district. My recommendation is to go with an AirBnB. My two night stay at an AirBnB in Matrah came down to around USD$130. I booked an AirBnB in Matrah, Muscat, a historic harbor neighborhood with Muscat’s famous Corniche and Matrah Souk. I highly recommend this AirBnB with host Mohammed if you are solo or two people (max capacity). Wonderful local location and Mohammed is by far one of the nicest and most hospitable hosts I have ever come across (knowing nothing was open he made me breakfast every morning during daylight hours when he himself was fasting!).

I went over Memorial Day weekend and had a total of just over 1.5 days. Upon doing some research I realized Oman has so much to offer and there is a lot more than just the capital city of Muscat. I decided with the time I had to book a full day tour of Jabal Shams, the Grand Canyon (second largest in the world) in Oman, a three hour drive from Muscat. I booked through Arabica Orient Tours. I would recommend going through them, they are only a couple bucks more than Viator but offer a more private and insightful experience. Due to Ramadan, I ended up being the only person on my tour and it was a brilliant time with just me and my English-speaking guide, Nabil. And because I was the only one, the itinerary became quite flexible. My full day tour was 88OMR (USD$220) and last about 9 hours, including the drives. The guide, tips, 4×4 vehicle and water was all included. The next day I spent exploring old Muscat. 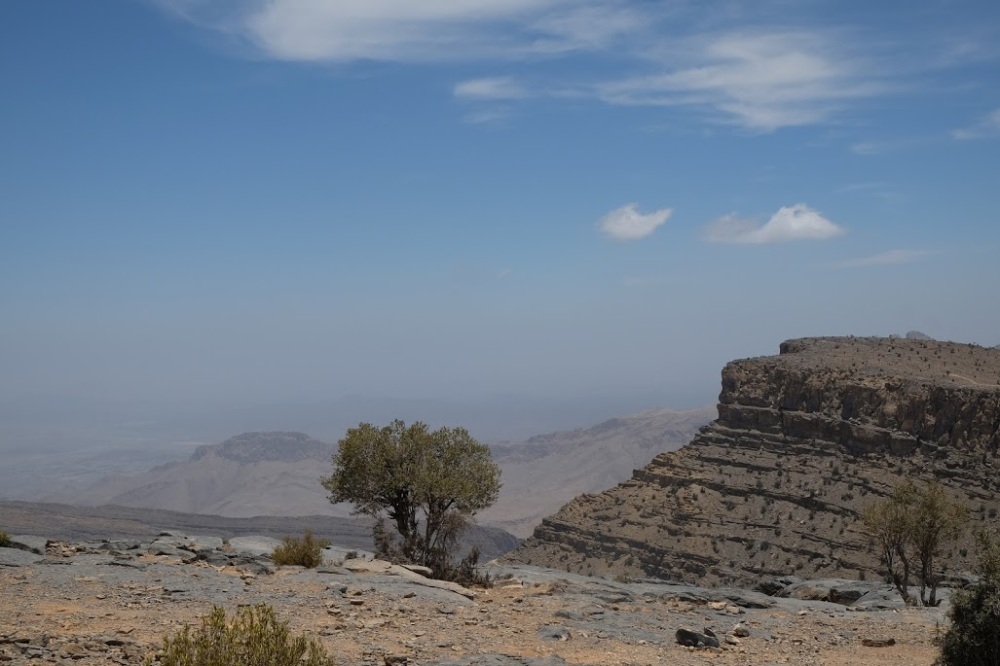 There is a lot to do and see in Oman and I am sure the experience would be even more incredible than it already was on my trip when its no Ramadan. But traveling during Ramadan also offered unique insights into local life and culture and like I said a big bonus was few visitors and cheaper taxi fares.

I highly recommend visiting Oman, and while most visitors head to the canyons, mountains, and beaches, dont overlook Muscat, as it has its charms and is beautiful, if you stick to the historic parts. I am definitely returning to this wonderful country and next time I hope to do some camping as well as scuba diving.