Wow, it has been a while since I last posted!

For my spring break this year my family and I ventured out to the land down under. I flew from St. Louis to Los Angeles then onwards to Sydney.

I purposely bought my specific flights because of one thing: to fly the Qantas Airbus A380 superjumbo.

The plane which was officially named the A380 in 2000, first took flight in 2005 and went into commercial service with Singapore Airlines in October 2007, with the first flight being Singapore- Sydney. In the summer of 2007, the superjumbo arrived in Taipei on its world tour, my late father and I ventured out to the airport to watch the plane leave Taipei, ever since I have dreamed of flying the jet.

My long dream to fly the superjumbo finally became a reality when I flew from Los Angeles to Sydney and back.

Flight back to LAX:

I booked economy, but checked in early in hopes of getting an upgrade to available premium economy class seats, but to no avail both ways. Nonetheless my journey was incredible. And as I will explain later, Qantas has quickly become one of my favorite airlines along with Singapore Airlines.

I had a 6 hour layover in LAX on my way to Sydney and so I had to make a trip to In N Out Burgers, which is still the best fast food chain in my opinion, SO GOOD! I also tried a hot dog from Pink’s hot dog, which was pretty good I must say. And of course, when I see Panda Express I must indulge myself in the guilty pleasure of getting some.

Back to the A380. The flight boarded on time. First and Economy class are on the main deck and Business and Premium economy are on the upper deck. Both at LAX and SYD all passengers board at the same gate and level. At some airports upper deck passengers take an escalator up a level or board through an entirely different gate.

I stopped before entering the aircraft to snap a few shots of the beauty: 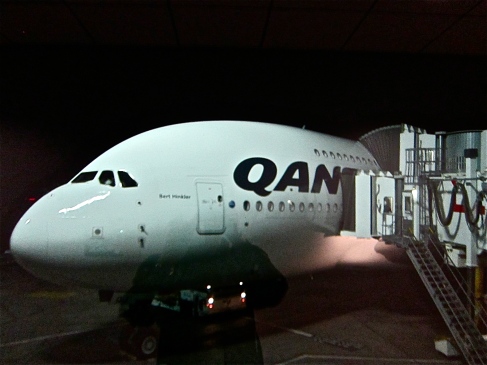 Then I walked towards the door and my heart was beating fast with excitement before finally stepping aboard the aircraft. My seat was 75K, a window seat in the green zone. I immediately noticed the roominess of the plane. There are 3 economy class cabins, the red zone:

The green zone where I was seated:

And the brownish orange zone, where on my flight back I was seated in 86G, an aisle seat:

I sat down, and soon the flight attendants came by with the menu and flight planner. The journey planner is at the bottom of the menu or in the AVOD system. It helps you plan your food and drink in take on the 14.5 hour flight to Sydney:

I also tested out the “netted footrest” which makes up this award winning economy class seat design. It was comfortable to let my feet dangle in the net, but I still preferred to just place my feet on the ground when sleeping; 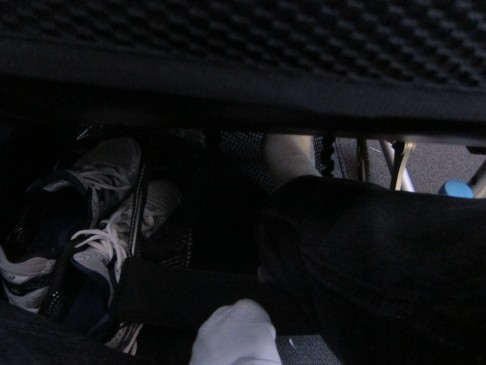 One thing that is popular and well received by costumers of the A380 is the tail camera. Passengers with seat back screens can enjoy watching take off, landing, taxi, or just in flight footage of the plane from this camera installed on the tail. Here are some snaps of the plane at the gate, taxi:

Take off was when I really noticed the difference on the A380, it was by far the QUIETEST and smoothest take off I have ever experienced. The plane has been called the “gentle giant” and I could see why. Even throughout the relatively smooth flight, the aircraft was very quiet.

After take off was the meal service, I must say the Qantas long haul economy catering is quite good for an airline. But the best part about flying Qantas longhaul is the after dinner service. After they collect the trays the flight attendants come by offering passengers with Cadbury Hot Chocolate served with a giant marshmallow or peppermint tea. On QF12 they also pass out a Refresh pack which is a small pack of snacks and a bottle of water.

I then went to the back of the plane, where the majority of the lavatories are located and also for economy class passengers is where the main self-service snack bar is located. In addition to the meal service and snack bar, the flight attendants came through the cabin about once every hour or 1.5 hour to offer cookies, biscuits, apples, mini pizzas, water, juice and many more items to ensure passengers were fed and comfortable.

I also peeped up the rear staircase: 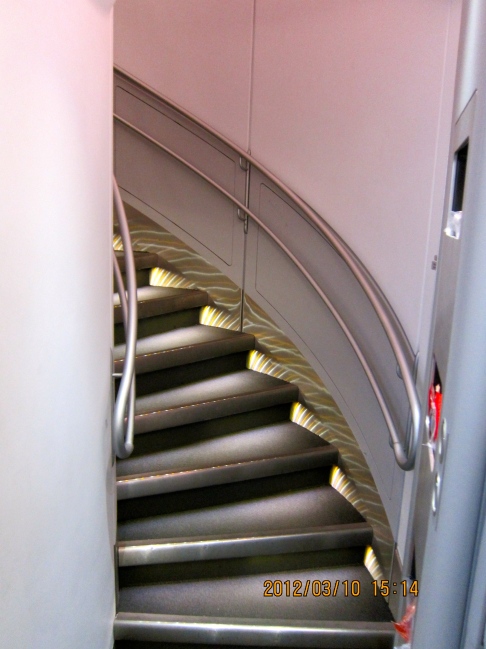 Then I went back to my seat, the cabin had been dimmed and purple mood lighting was turned on. Mood lighting is supposed to add ambiance to the cabin and also help with jet lag adjustments. I liked the added ambiance as it added even more comfort to the spaciousness and comfort of the A380. After sunrise the moodlighting became a calming orange color to indicate sunrise. In addition to more space, I felt the cabin air quality to be much better, even though its the Boeing 787 that is promoting the extreme improvement in air quality and humidity at 37,000FT, I thought the A380 was an improvement already. My nose and throat did not dry out as easily. But I can’t say for sure until I experience the 787 on a longhaul flight. 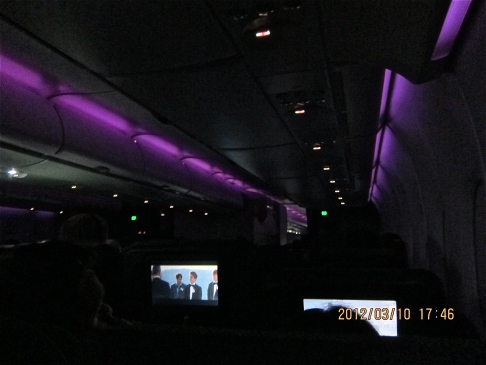 Above is one of many pictures I took of the massive wings. They are so big that when the plane is on the ground, the ends of the wings droop downwards from the weight: 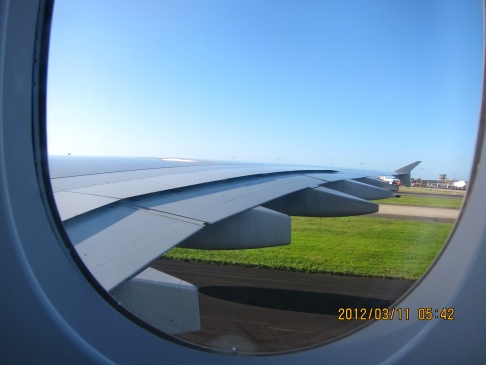 After our arrival, I took a tour of the aircraft after most passengers had disembarked. I had asked to do so earlier in the flight. I did the same thing on the way back because I felt I didnt fully take in the experience, partly because I rushed since I could sense the cabin crew wanted to get off the plane but they were nonethless very friendly. A friendly Qantas flight attendent followed me as I climbed up the rear staircase up to the upper deck. First was the upper rear galley with some crew rest seats, even though the main crew bunks were below deck: 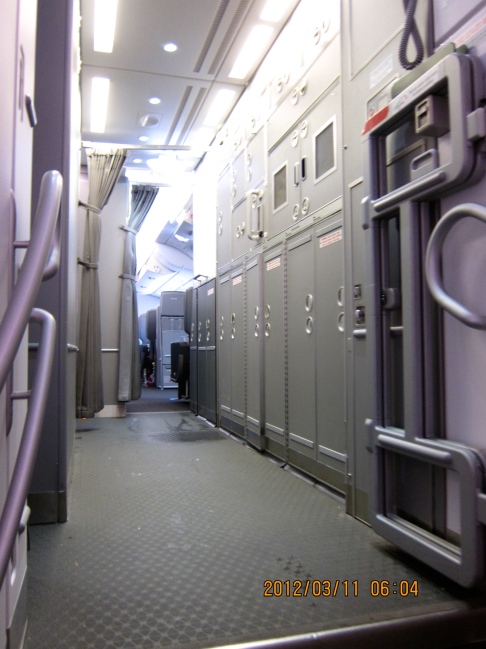 Then the premium economy class cabin, Qantas sells their product as a “light business class” rather than an improved economy class: 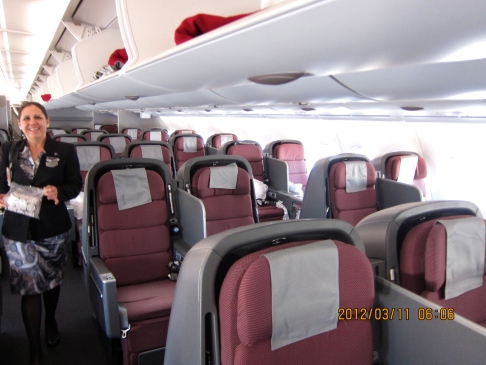 A photo of the wings from an upper deck window: 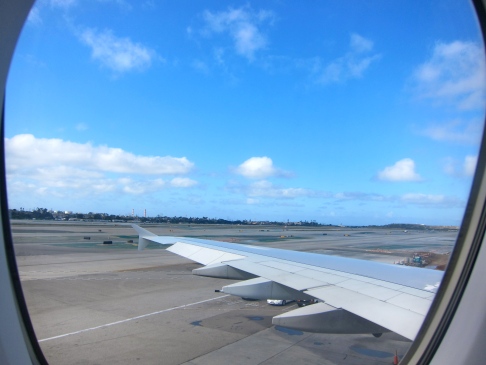 Whilst touring, the flight attendant found an unused business class amenity kit, and being the only touring passenger she gave it to me! Later on the main deck another flight attendant gave me some business class pajamas! Then I arrived at the front of the upper deck with the Business class lounge, where one can read magazines, catch up with someone, do business transactions or even make a presentation using the plasma screen provided. 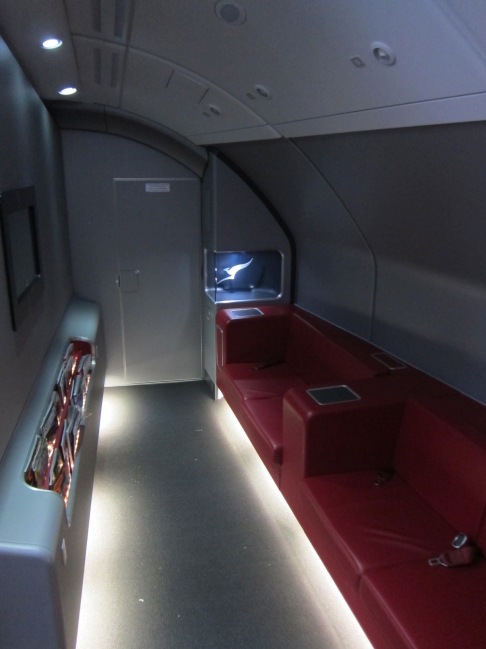 Then down the front staircase, and also shown is the Qantas logo on the wall atop of the staircase: 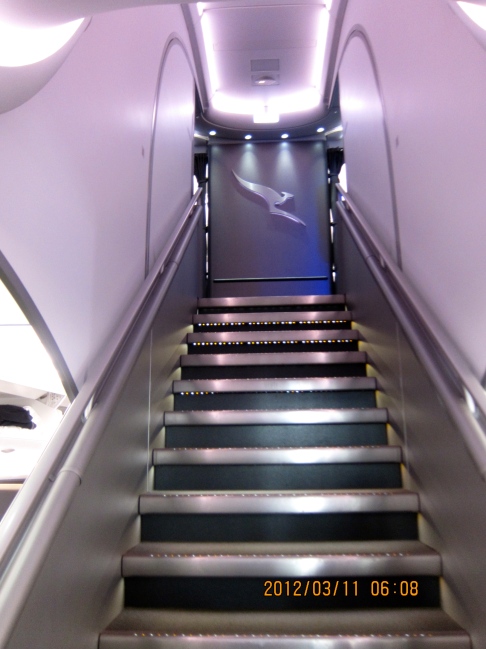 Then I toured the first class cabin: 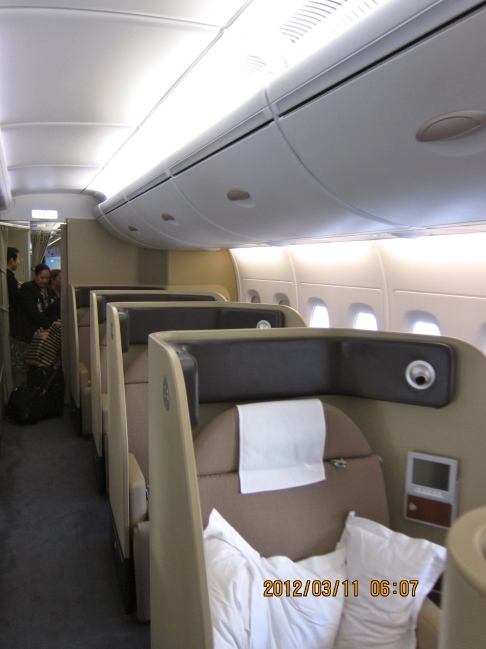 Finally I saw that the cockpit was open and asked to tour it, and they told me yes. I climbed up the small steps and into the cockpit of the A380! On QF11 the pilots and captain were still there and they invited all the kids and me inside and were very welcoming and happy about it. When asked “747 or A380” and young pilot said “A380” with a big smile. I also saw the flight crew rests located behind the cockpit.

I was very sad to have to disembark in Los Angeles because it was such an incredible journey. The A380 experience definitely exceeded my expectations. Now my next hope is to flying in one of the premium cabins, especially on Emirates or Singapore Airlines.

Qantas truly is a great airline, and its no surprise that it has lasted 91 years without ever ceasing to operate. The cabin crew and ground crew are all very friendly, professional, and care about their job and Qantas and Australia. The food is good, wine good, entertainment great, and probably one of the best long haul economy class journeys I have ever been on. Even on the domestic sectors we flew on, the standards were the same. It may have suffered some negative issues recently and its image may have been hurt, but I honestly think its still one of the best airlines out there and I would HIGHLY RECOMMEND flying Qantas on your next trip.

More importantly, if you have the choice, I would definitely recommend you choose the flight operated by the A380, it truly is a more comfortable plane to fly in and makes long haul flights just a bit more bearable than normal.

Next aviation goal: fly the Boeing 787 Dreamliner on a longhaul flight.